2nd class citizen in my own family 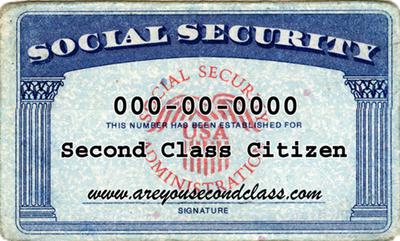 I was the eldest child in step family situations on both sides. It was like being a second class citizen in my own family. On my mother's side, a new child was born, and the entire family revolved around this new child. On my dad's side, he remarried women who had kids from prior relationships. In both instances, I felt like an "add on" and I felt like I was standing outside, looking in. I felt like my birthright was stolen from me. Not only did nobody care, I was expected to love these people and these situations, while they were not required to love my family on the opposite side. Emotionally it was a one way street--I gave love to their whole families, they gave love to 1/2 of mine.

Just today I had a conversation with a friend whom I had not talked to in a long time. She remarried a couple years ago, and new husband has younger kids. She remarked that even though she loves her husband very much, it is so hard with the kids, and she sounded a little bitter about it. The elder girl just turned 13 and is beginning to act up. I didn't say anything, but I wanted to say, "As hard as it is for you, it's about 100 times harder for the kids." I felt a little offended at her words. The kids intuit that their family has been destroyed, but they cannot articulate it yet. And even if they could, would they? Not likely. So they will act out. I'm sure that for now, they buy the crappy line that it's just an alternate family form. I call foul. It's only an alternative family form from the adult's perspective. From the child's perspective, their family has been destroyed. There is no way to sugar coat this--this is the reality.

I think it should be illegal for a parent to remarry if the kids are under 18, maybe even under 21. The new spouse, that spouse's family, and new children creates a new family structure, on that the older children are not part of, one that they may not even want to be part of. They don't want to be forced to love people and those people's family, who do not in turn love their whole family. It creates emotional obstacles for the older children that may take them their entire lives to unravel and heal. I'm 47 and to this day it still hurts.

ADULTS: WAKE THE F*** UP AND QUIT SACRIFICING YOUR CHILDREN SO THAT YOUR GENITALS CAN FEEL GOOD! It's really disgusting, so don't be shocked or surprised when your kids don't respect you, and don't you dare chastise them for objecting to your selfishness. They intuit more about how you're supposed to act than you know.